There is nothing better than a boat trip. Apart from everything else, the swimming, the diving, the adventure, the romantic moments, at the same time we have the opportunity to get to know new places. To learn about their history, to discover ‘hidden’ elements, sometimes standing in front of us.

In the antiquity there were two ports in Thasos. Outside the strong walls of the city was the Commercial port. The only technical project for this port was a windward pier. It had an EW direction, with the length of 115m and the width of 18-20 meters. This windward Northern pier was covered with marble blocs and ended in a circular construction, diameter of 20 meters, which probably means the existence of a tower. Remains of today can be seen just below the sea level in the area towards Evreokastro, where the carnagio (shipyard) of Limenas used to be. The Commercial port was excavated in May 1992.

Walking around the nowdays old port of Limenas, with the fishing boats of the locals, the tavernas and the huge plane trees, a careful visitor of today can see traces of what was once the closed ancient Military Port of Thasos. It is a port used through time until today, for different purposes over the centuries.

Initially, it was built and operated, from the 6th to the 2nd century BC. as a military port, while in Roman times and after the alterations of the early Christian period (4th-7th century AD) it was used as a commercial port. The layout of the port, as well as its role, changed. Some of the buildings that existed in the port before, such as those of the neoria, the boat shelters, changed their use to serve the new needs. From buildings for warships, throughout the classical and Hellenistic period, they were converted into storage areas. There, in large jars, was stored the grain, the oil, and other products of the Thasian land.

The capacity of the military port reached the 45 warships of the time, the triremes. Despite its relatively small size, this port could protect the city from sea raids. At some period, in fact, was developed as an important naval base of the Athenians in the area.

Saying ‘closed’ it means fortified. From the 5th century BC the military port was protected by fortifications, coastal and build in the sea, with circular towers at its entrance and at the corners. The towers had an internal staircase leading to the roof and were equipped with defense machines of the time, catapults, crossbows, etc. Towards the sea side there was a high marble wall, possibly 4 meters, 2 meters wide, made of two sides of processed marble blocks, while the intermediate gap was filled with raw material. This wall was the continuation in the sea of the land walls of the city. It communicated with the ancient market through three gates and a paved road. In the past, this port was called ‘marble port’. Carved blocks from the crumbling wall, as well as the foundations of four circular towers of different eras, are visible today in the sea level.

Inside the port on all three sides, East West and South, were the neoria. Remains of the ancient boat shelters as well as the Sanctuary of the Goddess Sotira Ellimenia have been found during the excavations of the 80’s. This port is the first naval base to be excavated and is considered a monument-station in architecture, urban planning and technology.

As the first and most important systematic search of ancient port facilities in Greece, the excavation in Thasos revealed the two ports of the city, the commercial and the military, in the same place with the current settlement of Limenas and its port facilities. The first phase of underwater research in Thasos began in 1980 and concerned the military port.
In 1984, after the accidental discovery of archaeological remains, during the removal of material for the dredging of the basin in the only port of Thasos at this time, an underwater survey was organized by the Ephorate of Marine Antiquities, in order to investigate the archaeological site and protect the antiquities. From the beginning, the French Archaeological School (École française d’Athènes) assisted in the research. The systematic research lasted until 1992. The collected material is kept in the warehouses of the Thasos Museum. Apart from the findings, the range of literature produced by this research is impressive.

The ‘closed’ military port had a quadrilateral shape. The northeast side (A, B) was 148.60 m long and turned southwest (B, C) to a length of 45 m. Respectively, the southern side turned northeast by 31 m. In the extension of this section was until the early Christian period the west coastal wall (D, G).

The location of four circular towers was identified (B, C, F, G in the drawing). It is believed that the entrance of the ‘Closed’ Port of the Classical and Hellenistic era was in the position C, D. The current entrance of the port at position F, E, where the two port lights green-red exist, is believed to be opened in the early Christian times, when the entrance C, D was abandoned, probably due to alluvium.

The neoria were facilities by the sea, were, throughout antiquity, were protected the warships. The long warships could not be kept in good condition and ready for naval battle if they were not stored in a dry place. In particular, triremes, with their fragile hulls, did not have to stay in the sea for a long time, because they became heavy and consequently their flexibility and speed were reduced. The neoria were divided into apartments, the neosikoi, covered with pitched roofs and their floors sloping towards the sea. The warships were sometimes lifted either on built-in sloping ramps with a slit in the middle, or on timber placed at regular intervals across the widths (grids). The way of lifting the boats has not been determined, if it was done by mechanical means or by human hands.

All the major ports of the coastal ancient cities, such as Samos, Thassos, Corinth, Corfu, Gythio, Syracuse, etc. they had their neoria. The largest, however, were those of Athens, whose construction began in the years of Themistocles, after the Median Wars and their greatest prosperity coincides with the prosperity of the Athenian navy in the years of Pericles. Zea was the main military port, which could contain up to 200 triremes, while the nearby military port of Munichia had the capacity of around 100, as well as Kantharos, today’s port of Piraeus.
The following are examples of ancient neoria.

In central and southern Greece

The most important are the neoria of Zea, built after the Medic wars to meet the needs of the new, powerful Athenian fleet. They were destroyed by the Spartans immediately after 404 BC. and were rebuilt in the 4th c. BC occupying a larger area and being able to overwinter 372 warships. Kantharos was the second largest naval base. It was doubly important, because in addition to the neoria complexes, it also had an extensive commercial zone. And in the third port of the Piraeus Peninsula, Munichia, there were groups of neoria, capable of 82 warships during the 4th c. In Ramnunda, recent and ongoing research by Oxford Professor Dr. D. Blackman aim to determine the form of the port of the ancient city, with positive results so far.

We find a different form in the neorio in Sounio. It is a neorio for only two ships, next to each other, which is located separately outside the walls of the fortress and the sanctuary. The neorio in Sounio is isolated from the rest of the fortification by a wall, behind which is the main entrance of the fortress with excellent care, fortified and accessible only from the port. The neorio itself is protected to the north by a square tower. The small capacity of the neorio in Sunnio and its location at the end of the homonymous cape means that it is not an organized naval base, but a small, intermediate outpost, used before the naval expeditions of the Athenians.

Many other ancient ports with their neoria are known in central, southern and island Greece, such as, for example, in Aegina, where the remains of the neoria are visible in the hidden “closed” port. In the island of Kea in its ancient city, Karthea. In Boeotia, debris remains in the “closed” port of the ancient coastal cities of Larymna, Anthidona and Alon. In Corinth, it is worth mentioning the ports of Kechree and Lachaio, where the warehouses of goods were built on ancient foundations during Roman times. Gythio, moreover, served as a naval base of the Lacedaemonians in correspondence with Piraeus of the Athenians.

In northern Greece, the neoria of Thassos have been systematically excavated, being a guide and a measure of comparison for the study of other neoria. The neoria of Thassos came to light after the eight-year underwater archaeological excavations of the Ephorate of Marine Antiquities in collaboration with the French Archaeological School of Athens. Based on the data of the “closed” military port of Thassos, the restoration of the neoria in the “closed” military port of Samos took place. The first phase of these neoria dates back to 530 BC, at the time of the tyrant Polycrates and they are mentioned in sources and historical testimonies. Besides, a typical example for the change of the way of lifting the triremes within the neoria, with the use of wooden horizontal beams at intervals instead of the central lifting grate, a method which, as it seems, was applied in Hellenistic times, is that of the neoria of Kos, in the Dodecanese. In the Acarnanian city of Oiniades, the neoria of the military port were created by carving the rock. Today, there are five rows of columns on land that formed six parallel compartments for ships.
Neoria in sanctuaries.

Another category of neoria is those in sanctuaries. These are neoria on land and especially in sacred places. Ships were dedicated to the deity of the sanctuary. The custom of dedicating ships to sanctuaries after a proud victory in a naval battle continues until the late antiquity. There are such neoria in Ireo of Samos, the monument of the Bulls in the sanctuary of Delos and the neoria in the sanctuary of the Great Gods of Samothrace.
Roman times.

In the Roman times the testimonies about the neoria are much poorer. Isidore, referring to the neoria, says that they are places where ships are built, while Vitruvius, describing the ideal port, talks about galleries, neoria and entrances to trade, confirming the view on the change of use and their role. However, the resemblance of the Roman navalia to the Greek neoria gives the impression that the architecture of these buildings has not changed at all over the centuries. Pictures with navalia are represented on mosaic floors, such as the one found on Via Adreatina, now in the Vatican Museum. 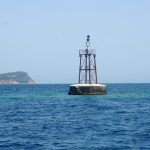 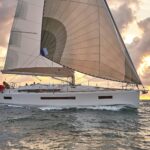 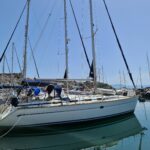